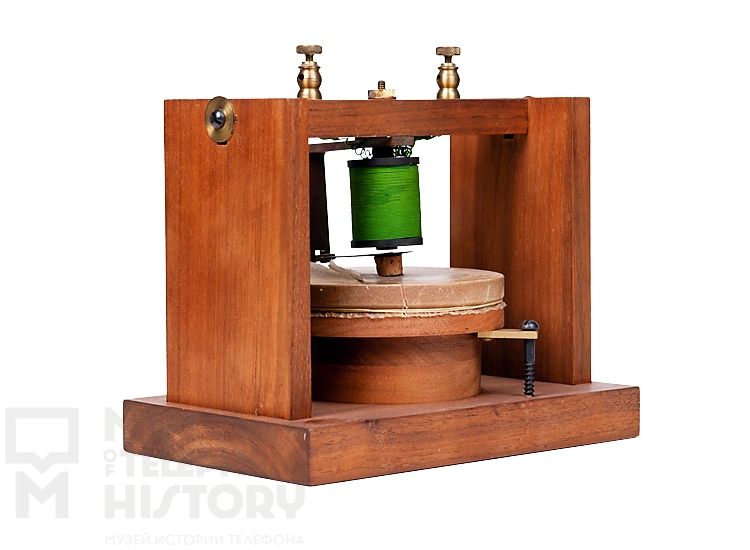 In 1861, the Frankfurt F.Reys Physical Society gave a lecture where he said that he built a device with which he could transfer music sounds at a distance. He described and demonstrated his device and called his phone. Transmission of sounds piano was performed at 100 m with voice failed. The idea of ??flight is not for practical applications. One of the devices Reis got to the University of Edinburgh, where he later studied A.Bell. A.Bell in 1871 he moved to the U.S., where open a private school for the deaf. In 1873, Bell - a professor of physiology at the School of Oratory at Boston University and is working on a harmonic telegraph. In 1875, during the experiments with the harmonic telegraph, he discovers that you can bring to a distance of human speech. The following year he submitted an application to the Patent Office (Washington, DC) for the invention of "the Telegraph device, which can be used to transmit the human voice." The date of birth of the first electric telephone is February 14, 1876 On this day, almost two hours later, in the U.S. Patent Office received an application from the American physicist J. Gray. Both applications were different. Bell designed the electromagnetic transmitter, which is passed to the line of the current changes due to changes in magnetic flux. Gray also proposed a method of changing the current - due to changes in the membrane electrical resistance of a conducting liquid column. Bell patented the device is almost ready. Gray also filed a preliminary notice of intention to invent a device indicating the proposed principle of his actions and was refused a patent. March 10, 1876 A.Bell handed first intelligible words he said to his assistant: "Mr. Watson, come here, I need you!". The length of the wire was only 12 meters. October 6, 1876 was the first mention of the invention of Bell in a scientific journal. The first electromagnetic telephone, invented by March 7, 1876 (date of receipt of the patent) American Alexander Bell consisted of a transmitter and a receiver. The transmitter consists of two electromagnetic coils, the windings which is galvanic current, and diaphragm rod against the electromagnet. Diaphragm made of the intestinal membrane and is equipped with a piece of soft iron, which acts as an anchor and talk vibrating. Anchor closer to the terminals of the electromagnet, changes the strength of the magnet, what excites inductive current that the wires to the receiver. Inductive current in the receiving coil will change the magnetic field of the electromagnet receiver, resulting in the movement of its anchor, which is connected to the diaphragm, which will vary under the influence of alternating current and cause the sound waves at the receiver, transmitting the sound from the transmitter.
Share
Previous model GPO India, 1950 y.