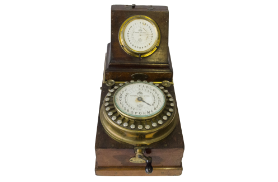 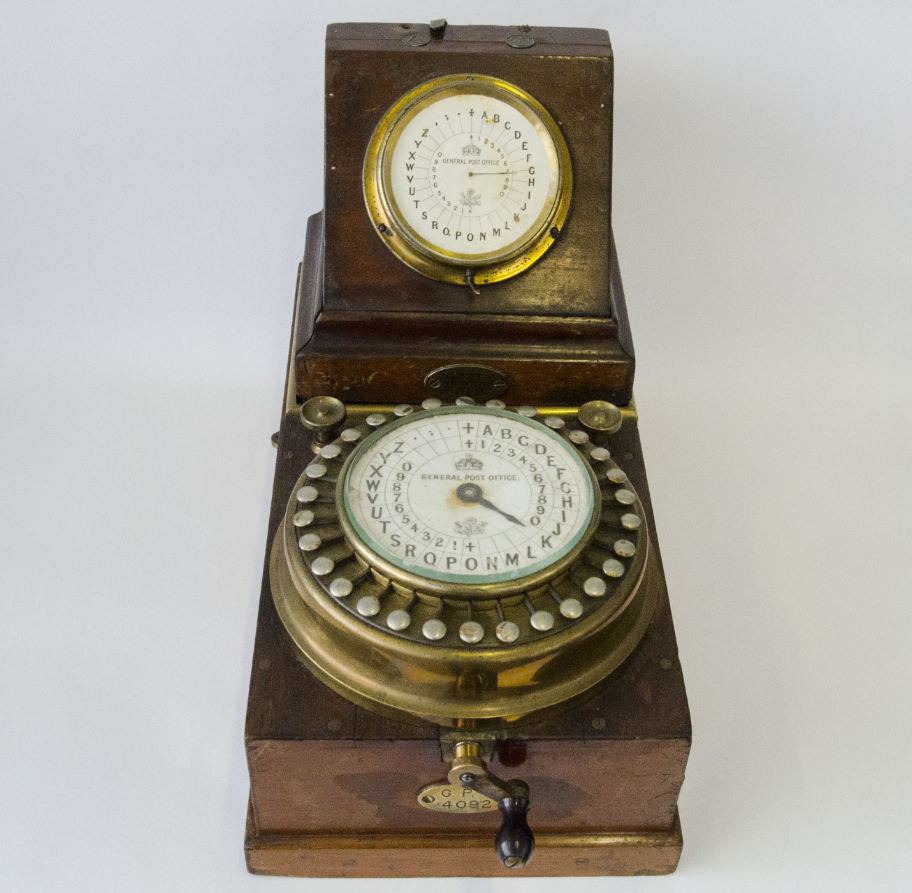 The electric telegraph, patented in 1858, was intended for use in offices and homes. The name Universal Telegraph was chosen carefully by Wheatstone because it was supposed to be used by ordinary citizens, rather than technicians. Initially the telegraph system connected individuals directly with each other via wires. Subsequently, it became possible to connect subscribers through a station.

Some information exists on the public telegraph system in Britain but virtually nothing on the private telegraph. This is surprising, given that one-fifth of all the telegraph devices in 1868 belonged to individuals.

The Universal Telegraph preceded the creation by Sir Charles Wheatstone and Sir William Cook (William Fothergill Cooke 1806 - 1879), who jointly created the electroplating Telegraph. This machine was patented by Cooke and Wheatstone on 21st January 1840. However, not seeing its commercial potential, Cook gave all the credit for the invention of the electroplating telegraph to Wheatstone.

The operating principle of Wheatstone’s 1840 patented galvanic dial Telegraph was as follows. The receiver used a disc rotated by clockwork mechanism. It used a needle as well as a transmitter - a small drum, which makes and breaks the circuit. As the drum rotated, the disk started to turn a dial in the top section. The receiver and the signal used by the clock mechanism required batteries.

This electromagnetic telegraph, as it was then called, was first used on a short line near the Great Western Railway between Paddington and Slough. In 1843, it replaced the original unit with two small arrows, which was used until 1845. In addition, for a short time in 1845, it was used on the London to Portsmouth line. In 1845 it was established at the Chemin de fer Paris à Versailles railway and used there until the end of the 1850s.

On 5th December 1846 the weekly British magazine ‘Punch, or The London Charivari’ wrote:

"And what a revolution it will produce in secular circles! A certain lady, organizing the reception, will invite hundreds of guests, taking advantage of the electric telegraph, and the guests will be able (in the same way) to accept o decline such invitations!”

"If the plan to introduce the electric telegraph for millions will be implemented, the work at the post office would become unnecessary, since by that time, writing letters will not be popular. In this case, it may become a central terminal for all telegraphs."

In 1846 the Electric Telegraph Company provided Wheatstone with access to its lines, so that he could further develop his dial telegraph. This contributed to the fact that Wheatstone improved the invention of the telegraph with Cook, creating the ABC Universal Telegraph in 1858.

Description of the 1858 ABC Universal Telegraph

The Alphabetic telegraph system consists of these main components: a generator device and a display. A communicator is installed with an indicator on top of a wooden box. The generator is located internally and is controlled by a handle extending from one edge of the box. The generator consists of an anchor, around which is wound thin wire. The anchor is rotated between the poles of several permanent magnets. Rotation of the armature is by means of an external handle, which generates a series of positive and negative pulses of current flowing to the telegraph line in the receiver station. The messenger controls transmission of the current pulses. It is equipped with a circular disk with the letters of the alphabet on the edge and an arrow attached to the center of the disc. Next to each letter in the drive device is the key. To send a letter you needed to press the corresponding device button and turn the generator handle. After transmission of several pulses corresponding to the letter you selected, the device shuts off the generator from the telegraph line. When the arrow device rotated, the generator transmitted the signal and ceased transmitting when the generator was switched off.

On the receiving end, the light pulses were decoded. In the indicator there was a circular disc with the letters of the alphabet on its edge and located at the center of the disc. With each pulse, the arrow moved across the disc and stopped on the corresponding letter. Proper synchronization of the device and the indicator was needed. It was possible to transfer numbers and punctuation as well as letters. Apparently, the speed could be up to 15 words per minute.

Alphabetic telegraphs designed by Wheatstone were originally used by government departments and later by smaller postal and telegraph offices in areas where the volume of transmission of information by telegraph was small. They were also used in private newspapers and other businesses.

Museum Night 2016 in St. Petersburg: get inside the telephone, make a movie and remember the 1980 Olympic Games
Next news