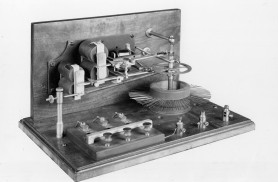 According to one legend, Almon Brown Strowger was the owner of the only funeral home in Kansas City and his business went perfect. But, over time, the number of customers began to decline. One day, looking through the obituaries in newspapers, he realized that he was no longer the only one in this business: he had a competitor! It turned out that the telephone operator, who worked at the telephone exchange, was well acquainted with the owner of another funeral home and all orders received by phone were forwarded to him. Strowger decided to rectify the situation. Once in the workshop he had the brain-wave to create a device with which one could make calls directly between the parties without using a telephone lady. He succeeded. Strowger invented an automatic telephone 10-step type switchboard with up to 99 subscribers, as well as a disc number dialer, inventions that are still operational today. Strowger conceived his invention in 1888 and, in 1891, patented the automatic telephone exchange. The Strowger Automatic Telephone Exchange Company was founded on October 30, 1891.

Desk telephone with an 11-digit rotary dial and original remote calling. The dial had numbers from 0 to 9 plus two additional positions to communicate with the operator if one needed to call outside the local station. Used in various institutions and private homes. Strowger Company. United States, 1905. Was used in different services, offices and private homes.