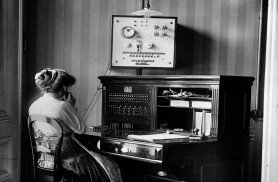 Educated citizens of the Russian Empire from the late 1870s appealed to Cabinet with proposals to organize telephone communications in the largest cities of the Empire. Most important was the operation of private telephones in the country which already worked, connecting homes, offices and residences of prominent industrialists and monarchs. The first telephone conversation took place in our country in 1879 between St. Petersburg and Malaya Vishera. Familiarizing Russians with the telephone en masse began with the highest approval by Alexander of the 3rd Regulation 'On the organisation of city telephones', delivered from the Cabinet on September 25, 1881.