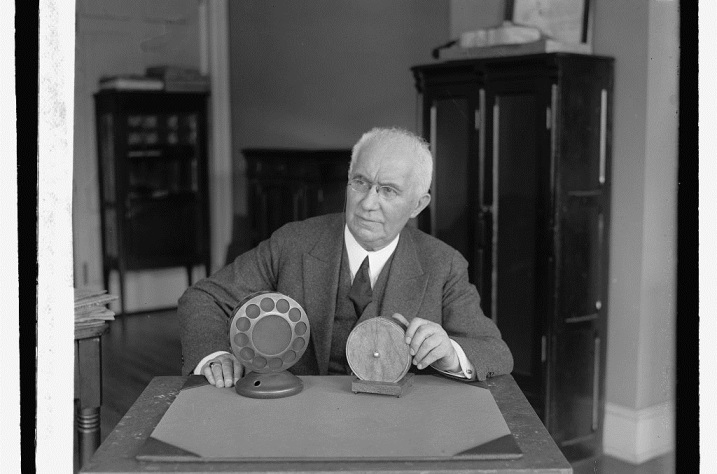 American inventor Emile Berliner was born into a Jewish family in the German town of Wolfenbüttel, near Hanover on May 20, 1851. In 1865 he graduated from school in the same town. In 1870 he moved to the United States, where he worked in New York and Washington as clerk, salesman and chemical laboratory assistant while studying electricity and acoustics at the New York Cooper Institute.

In 1876 Berliner began to explore new plans of Bell's phone. Erecting a speaker made from a soap box, Berliner assembled a unique microphone. With the addition of the induction coil, the telephone became much more practical. With improvements the Berliner telephone ceased to be simply a technical innovation and instead became an effective means of communication that could transmit sounds over long distances. In 1877, Emile Berliner received patents for his carbon microphone, the use in telephony of the principle of loose contacts and the induction coil. The Bell Telephone Company acquired the patent for Berliner's inventions and invited him to work as a senior specialist inspector for electrical appliances.

In 1887 Berliner developed the Gramophone, as well as a flat disk for recording sound. With the invention of the gramophone record, it became evident that one of the main reasons for sound distortion on manually rotating Edison cylinders was gravity. Plates coated with shellac successfully recorded the sound waves. In addition, Berliner found a way to reproduce copies of the original records (now called duping).

In 1895, Emile Berliner founded Berliner Gramophone, the first company to sell gramophone records. Two years later they opened a branch in the UK, called the Gramophone Company (now EMI, one of the largest record companies in the world) and a year later in Germany (Deutsche Grammophon).

Berliner tried his hand in many industries. Many later inventions were related to the aviation industry. In 1908 he built the first light aircraft engine with a radial arrangement of cylinders and, in the years 1919-26, built and successfully test-flew three helicopters.

Berliner was also interested in health issues. In 1890 he founded the Society for Illnesses Prevention (subsequently to become the Department of Medical Education) and, in 1907, was the organizer of the first conference on the quality of milk and dairy products in Washington, thanks to which legislative acts were adopted for milk pasteurization which led to the development of relevant standards.

From 1915-22 he was President of the Tuberculosis Association in Columbia District.